Synopsis: At the end of one world, there always lies another. Safire, a soldier, knows her role in this world is to serve the King of Firgaard—helping to maintain the peace in her oft-troubled nation. Eris, a deadly pirate, has no such conviction. Known as the Death Dancer for her ability to evade even the most determined of pursuers, she possesses a superhuman power to move between worlds. When one can roam from dimension to dimension, can one ever be home? Can love and loyalty truly exist? Now Safire and Eris—sworn enemies—find themselves on a common mission: to find Asha, the last Namsara. From the port city of Darmoor to the fabled faraway Star Isles, their search and their stories become woven ever more tightly together as they discover the uncertain fate they’re hurtling towards may just be a shared one. In this world—and the next.

The final book in the thrilling Iskari trilogy is finally here, and what an ending it is!

END_OF_DOCUMENT_TOKEN_TO_BE_REPLACED

HAPPY HALLOWEEN!!! I’m back to celebrate the last day of Blogtober and Halloween with a final spooky book tag! I found this one at The Sassy Book Geek and thought it would be the perfect way to end the month!

Favorite Scary (Must Read) For Halloween?

The Creeper Man by Dawn Kurtagich is one of the most inventive and unique horror books I’ve ever read so definitely this is a must read!

END_OF_DOCUMENT_TOKEN_TO_BE_REPLACED

Synopsis: In the exclusive gated community of Withered Vale, people’s lives appear as perfect as their beautifully manicured lawns. Money, success, privilege – the residents have it all. Life is good. There’s just one problem. Olive Collins’ dead body has been rotting inside number four for the last three months. Her neighbours say they’re shocked at the discovery but nobody thought to check on her when she vanished from sight. The police start to ask questions and the seemingly flawless facade begins to crack. Because, when it comes to Olive’s neighbours, it seems each of them has something to hide, something to lose and everything to gain from her death.

Do you ever really know the people in your neighborhood? This book just proves that no mater how well you think you know someone, you never know what will be lurking around the corner.

END_OF_DOCUMENT_TOKEN_TO_BE_REPLACED

Synopsis: John Douglas is a former FBI Special Agent and expert in criminal profiling and behavioural science. He made a career of looking evil in the eye – and understanding it. No wonder that he was the inspiration for Special Agent Jack Crawford in The Silence of the Lambs, as well as the film’s consultant on the reality of serial killers. Douglas invented and established the practice of criminal profiling, and submerged himself in the world of serial killers in a quest to understand why they killed, and to help prevent more innocent lives from being ended by future killers. As his serial crime unit developed from a derided two-bit operation in a dingy officer to one of the FBI’s elite task forces, Douglas personally confronted the most terrible crimes of the age, including those of Jeffrey Dahmer, Charles Manson, Ted Bundy and the Atlanta child murderer.

Now a bestselling Netflix Original series, this is where it all began. The hunt for serial killers, and the basis for what we know about the most evil minds of the world.

END_OF_DOCUMENT_TOKEN_TO_BE_REPLACED

It’s spooky time again! Here’s another Halloween tag that I found over at Book Princess Review and it sounded so amazing so I thought I’d give it a go!

What goes bump in the night?
Name a book that has legitimately scared you while reading it

The Amityville Horror by Jay Anson really creeped me out when reading it at night!

END_OF_DOCUMENT_TOKEN_TO_BE_REPLACED

Synopsis: In December 1975, the Lutz family moved into their new home on suburban Long Island. George and Kathleen Lutz knew that, one year earlier, Ronald DeFeo had murdered his parents, brothers, and sisters in the house, but the property–complete with boathouse and swimming pool–and the price had been too good to pass up. Twenty-eight days later, the entire Lutz family fled in terror.

One of the most notorious examples of a supernatural presence, and one that has split the nation. The legend is explained in full in this book, and you don’t want to miss it.

END_OF_DOCUMENT_TOKEN_TO_BE_REPLACED

It’s spooky time again (even if this post is a lil late – sorry!)! Here’s another Halloween tag that I found over at A Book and A Cup of Coffee and it sounded so amazing so I thought I’d give it a go!

Either Pet Sematary or Dracula for definite! I loved both of these books, Dracula is probably my favourite out of both but I loved them so much!

END_OF_DOCUMENT_TOKEN_TO_BE_REPLACED

Synopsis: Who are the Sawkill Girls? Marion: The newbie. Awkward and plain, steady and dependable. Weighed down by tragedy and hungry for love she’s sure she’ll never find. Zoey: The pariah. Luckless and lonely, hurting but hiding it. Aching with grief and dreaming of vanished girls. Maybe she’s broken—or maybe everyone else is. Val: The queen bee. Gorgeous and privileged, ruthless and regal. Words like silk and eyes like knives; a heart made of secrets and a mouth full of lies. Their stories come together on the island of Sawkill Rock, where gleaming horses graze in rolling pastures and cold waves crash against black cliffs. Where kids whisper the legend of an insidious monster at parties and around campfires. Where girls have been disappearing for decades, stolen away by a ravenous evil no one has dared to fight…until now.

A fantastical and mystical book about the power of girls, friendships and all things dangerous.

END_OF_DOCUMENT_TOKEN_TO_BE_REPLACED

I’m (finally) back with another very belated blogtober post! I’ve not been well for the last week or so, so the blogtober posts got pushed back a little bit. However I am determined to catch up!

Today I wanted to share some of the books on BooksandLala’s favourites list that I am desperate to read! I absolutely adore her, and her reading style is not only very similar to mine, but I also just completely trust her recommendations and she’s my favourite Booktuber!

She also has A LOT of books on her favourites list, so I’m only going to choose a couple that I’m excited to read – otherwise this post would be SUPER long! 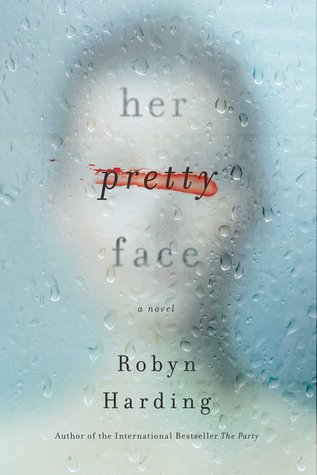 Her Pretty Face by Robyn Harding

I’ve heard really good things about Robyn Harding and since this is the book of hers on Lala’s list, I picked it up from the library!

END_OF_DOCUMENT_TOKEN_TO_BE_REPLACED

Title: I’ll Be Gone in the Dark by Michelle McNamara

Synopsis: The masterful true crime account of the Golden State Killer – the serial rapist turned murderer who terrorised California for over a decade – from the late Michelle McNamara. I’ll Be Gone in the Dark offers a unique snapshot of suburban West Coast America in the 1980s, and a chilling account of the wreckage left behind by a criminal mastermind. It is also a portrait of one woman’s obsession and her unflagging pursuit of the truth, three decades later, in spite of the personal cost.

The masterful record of one of the most talked about true crime cases in the world, this book is truly a wonderful piece of work.