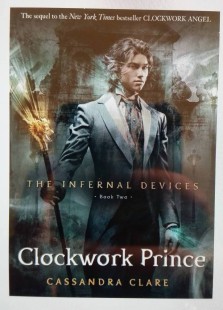 The Infernal Devices trilogy are the prequel series to The Mortal Instruments, and the first chronological part of the Shadowhunter Chronicles.

The trilogy follows the story of the London Institute, home to Shadowhunters including James Carstairs and Will Herondale. It follows their struggle to keep female protagonist Tessa Gray safe from the hands of Mortmain, and the developing story between the 3 of them.

First off this series was one of the best I’ve ever read in my life. I read The Mortal Instruments first and couldn’t believe how great they were, but after reading TID I’m even more amazed.

The setting of the story, London in the 1800s, was a nice change to TMI and most fantasy novels as they’re usually set in a fictional world or America. It was nice to have familiar settings. The language that the characters used throughout the novel was also brilliant as it was how they would talk in the 1800s compared to being set then but having the same language as now.

The writing style overall is just brilliant. I was hooked from the first page and the development of not just the three ‘main’ characters, but all the characters throughout the books is great to see. Too many fantasy books focus on developing the main characters without paying attention to the little details, these three books definitely aren’t like that.

The story is so fast paced and exciting that you can’t help but keep reading probably way past your bedtime. I loved the uniqueness of the story, I’ve never read one quite like it, or as beautifully written, and definitely never one I’ve become as invested in the characters as I am.

I think my favourite thing about the trilogy however, was just how clever it was. It explained so much about what happens in TMI, yet does it subtly so only those who have read TMI will understand what it’s explaining.

I love how every lose end that happened in TMI was tied up, and I frequently found myself with a massive grin on my face at a large proportion of the three novels.
If you’re read TMI before, then please read TID! It will explain so much and they’re so great too

If you haven’t read any then why not give them a try! You won’t be disappointed, Cassandra Clare has outdone herself with her amazing talent on these books!

What did you think of these books?

5 thoughts on “The Infernal Devices Trilogy by Cassandra Clare // Review”